Last week, while at a gas station, I was approached by a man. He was probably in his sixties, with shabby, dirty clothes, and a scruffy beard. The following conversation ensued:

Man: I like your necklace.
Me: Uh, thanks.
Man: (staring far too long at the chest region) At first I thought it was gold.
Me: (awkward silence)
Man: But it’s not is it? It’s silver. Heh.
Me: Okay, I need to go.

I would have extracted myself from the interaction sooner, but I was in the middle of pumping gas. As I got into my car and drove away, I couldn’t help but feel icky and violated.

Honestly, I am fed up with this sort of encounter. I have had far too many creepy interactions with men. In fact, I’m beginning to wonder if my neighborhood (or possibly the city of Los Angeles) has an inordinate number of these men prowling the streets.

When approached by a stranger, I used to give as much benefit of the doubt as possible. Hey, maybe this is a friendly grandfather with no other motives than to chat. But midway into the conversation, the man says something inappropriate or lingers too long with his eyes. My intuition starts to send warning signals to me. I begin to feel unsafe and self-protective. I start reaching into my purse for my keys, strategically planning how to gouge the stranger’s eyes out if I am attacked.

Creepy Men, do I look like I want to talk to you? Am I giving off some sort of Please Come Hit On Me vibe? Just to set the record straight, I do not appreciate your advances. I am not interested in being objectified or disrespected. How would you react if someone treated your wife or daughter like that? Yeah, I thought so.

I would love to live in a world where everyone can be trusted. Where we didn’t have to worry about people’s dark motivations and secret agendas. But unfortunately, it is not that type of world. So from now on I think my new modus operandi will be to wield a large can of mace around, and pretend I don’t speak English (or whatever language Creepy Man is speaking).

Women, has this sort of thing happened to you? How did you respond? 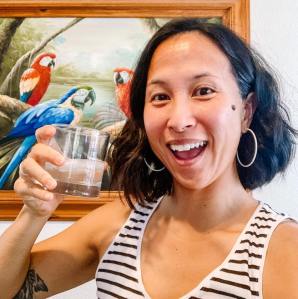